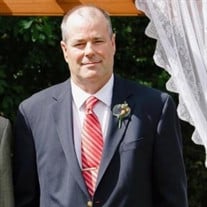 Timothy Alan Lusk passed away on August 24, 2021, after a brief illness. He was 55. Born May 14, 1966, in Manchester, Tennessee, to Benny and Nancy Lusk, Tim was the oldest of four children. Tim graduated from Coffee County Central High School in 1984. In 1990, he began his 30+ year career with Duck River Electric. A career in which he started as a lineman and advanced to become the District Operations Supervisor in the Manchester office. In December 1988, Tim married his high school sweetheart, Stefanie Duncan Lusk, who he cherished for nearly 33 years. He was a devoted father to Jordan and Alaina, and recently became a proud granddad to his first grandchild, Adeline. After work each day Tim could be found doing chores he enjoyed - working in his yard, taking care of his garden, and feeding his chickens. He was an avid hunter, outdoorsman, and Atlanta Braves fan, and could be found watching a Marvel movie at any time. The strong, silent type, Tim will be remembered for his boisterous laugh, his warm heart, and his never-ending desire to help a friend or family member who found themselves in need. Tim served as an elder at Grundy Street Church of Christ in Tullahoma, where he taught a Sunday morning Bible class. He had an unwavering love for his church family and a desire to teach others through his actions and not just his words. He is preceded in death by his father, Benny Lusk. Tim is survived by his wife, Stefanie of Manchester; son, Jordan (Courtney) Lusk of Tullahoma; daughter, Alaina Lusk of Manchester; and granddaughter Adeline Lusk; mother, Nancy Lusk of Manchester; brother, Jason (Lynn) Lusk of Shelbyville; Sisters, Kristy West (Kevin Keele) of Fayetteville; and Amy Sloan of Manchester; parents-in-law Johnnie and Joyce Duncan of Normandy; brothers-in-law, John (Heather) Duncan of Normandy, and Jeff (Gail) Duncan of Murfreesboro; and several nieces and nephews who looked up to and loved their Uncle Tim. All services will be held at the Grundy Street Church of Christ in Tullahoma. Visitation with the family will be on Friday, August 27 from 5:00 pm until 8:00 pm. Following a short visitation at 10:00 am, a funeral service is scheduled for 11:00 am on Saturday, August 28 with Brad Costello officiating. Burial will follow at the Blanton’s Chapel Cemetery. In lieu of flowers, please send donations to Project Help. Make checks payable to DREMC, memo should read “Project Help in Honor of Tim Lusk.” Mail checks to P.O. Box 1139 Manchester, TN 37349. Online condolences may be made at www.davesculbertsonfuneralhome.com. Daves-Culbertson Funeral Home is in charge of arrangements.

Timothy Alan Lusk passed away on August 24, 2021, after a brief illness. He was 55. Born May 14, 1966, in Manchester, Tennessee, to Benny and Nancy Lusk, Tim was the oldest of four children. Tim graduated from Coffee County Central... View Obituary & Service Information

The family of Timothy A Lusk created this Life Tributes page to make it easy to share your memories.

Send flowers to the Lusk family.