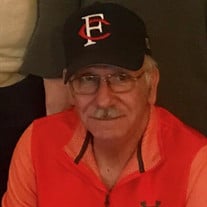 Thomas Francis Crossland of Winchester passed this life on Monday, March 29, 2021 at Erlanger Hospital in Chattanooga at the age of 73. Funeral Services are scheduled for Thursday, April 1, 2021 at 2 PM at the Little Mountain Church of Christ, 710 Old Holders Cove Road, Winchester, TN with burial to follow at Owens Chapel Cemetery. The family will receive friends beginning at 12 PM on Thursday at the church. A Winchester, TN native, Mr. Crossland was the son of the late Robert Love and Bessie Odell Crossland. He served in the U S Army National Guard for 30 years and retired as a First Sergeant. After retiring, he went to work at Zanini Tennessee and worked there for 19 years. He was a member of the Little Mountain Church of Christ. He was an avid hunter and fisherman and enjoyed attending baseball games and field trials. His favorite times were spent playing with his grandchildren. He also enjoyed working in his yard. In addition to his parents, he was preceded in death by brothers, Robert L. Crossland Jr and James R. Crossland. Mr. Crossland is survived by his loving wife, Sue Crossland of Winchester; sons, Tommy Ray Crossland and his wife, Rachel of Sacramento, KY, Mike Crossland and his fiancé’, Kim of Decherd and Travis Crossland and his wife, Rachel of Belvidere; brother, William Parker Crossland and his wife, Carolyn of Elkhart, TX; mother-in-law, Doris Bland of Decherd; grandchildren, John Thomas Crossland and his wife, Tasha of Clarksville, TN, Zachary Ray Crossland of Sacramento, Ky; Morgan Crossland of Gallatin and Chloe Jane Crossland of Belvidere; one great grandchild on the way; brother-in-law, Wayne Bland and his wife, Melissa of Seymour, TN; sister-in-law, Dinah Hall of Pigeon Forge; special nephew, Tommy Crossland and his wife, Theresa of Manchester and several nieces and nephews. In lieu of flowers, the family has requested memorial donations be made to the Little Mountain Ministry Camp, 710 Old Holders Cove Road, Winchester, TN 37398. Online condolences may be made at www.davesculbertsonfuneralhome.com. Daves-Culbertson Funeral Home is in charge of arrangements.

Thomas Francis Crossland of Winchester passed this life on Monday, March 29, 2021 at Erlanger Hospital in Chattanooga at the age of 73. Funeral Services are scheduled for Thursday, April 1, 2021 at 2 PM at the Little Mountain Church of Christ,... View Obituary & Service Information

The family of Thomas Francis Crossland created this Life Tributes page to make it easy to share your memories.

Thomas Francis Crossland of Winchester passed this life on Monday,...

Send flowers to the Crossland family.