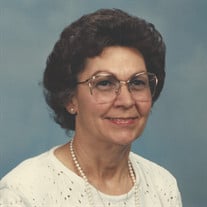 Ruth Porter Binkley, aged 93, went to be with her Lord peacefully on November 29, 2019 at Bailey Manor, Manchester Tennessee. Ruth was born February 5, 1926 in Difficult, Tennessee, the daughter of Estelle and Herod Porter. Ruth was raised by her mother and four loving brothers Kenneth, James, Charles, and Harry Porter who preceded her. Ruth was a woman of deep Christian faith, and a faithful and loving mother and grandmother to her five grandchildren and a great grandson. She embodied all aspects of Proverbs 31. Ruth also loved to travel, including trips to the Holy Land, Egypt, Greece, France and beaches in the US on both coasts. She raised and cared for many kinds of Hybrid Tea roses – some of which have survived for more than sixty years. In 1948 Ruth married Freeman Doyle Binkley and they moved to Tullahoma, Tennessee in 1951 where they built a home on Lake Tullahoma. Both Ruth and Freeman worked in the early space program for Arnold Engineering Development Center and then the new University of Tennessee Space Institute. After her husband’s death, Ruth continued to work at UTSI until her retirement in 1990. She was the first switchboard operator for the UTSI building and retired as administrative assistant to the Dean. Ruth was a member of Trinity Lutheran Church and First United Methodist Church in Tullahoma. Ruth is survived by her daughter Roxane Garrett (Robb) of Estill Springs, Tennessee, Mark Binkley (Linda) of Cary North Carolina, five grandchildren Jocelynne Nylec (Tommy), Sarah Fedler (Steve), Jessica Binkley (Sarah), Joshua Binkley, Kyle Binkley, and one great grandson Freeman Nylec. Ruth has fought the good fight and has finished her race. (2 Timothy 4:7). In lieu of a funeral service there will be a celebration of her wonderful life in the spring of next year. The family wishes to thank all of those who cared for her during her later years and who were special friends and visitors. In particular, the nurses and angelic staff of Tullahoma Life Care Center, Manchester Bailey Manor, and Avalon Hospice. Memorial donations may be made in her memory to an organization of choice. Arrangements were provided by Daves Culbertson Funeral Home in Tullahoma Tennessee. Online condolences can be left on Ruth Binkley’s Memorial Tribute at www.davesculbertsonfuneralhome.com.

Ruth Porter Binkley, aged 93, went to be with her Lord peacefully on November 29, 2019 at Bailey Manor, Manchester Tennessee. Ruth was born February 5, 1926 in Difficult, Tennessee, the daughter of Estelle and Herod Porter. Ruth was raised by... View Obituary & Service Information

The family of Ruth P Binkley created this Life Tributes page to make it easy to share your memories.

Ruth Porter Binkley, aged 93, went to be with her Lord peacefully...

Send flowers to the Binkley family.