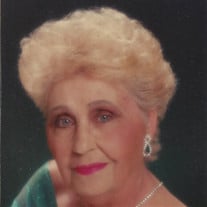 Roberta H. Carden, 88, of Tullahoma, TN passed away Friday, October 11, 2019 after a long battle with cancer. She was born in Manchester, TN on January 24th, 1931 to Charlie and Annie Hobbs Henderson. She is preceded in death by husband Charles... View Obituary & Service Information

The family of Roberta Henderson Carden created this Life Tributes page to make it easy to share your memories.

Send flowers to the Carden family.