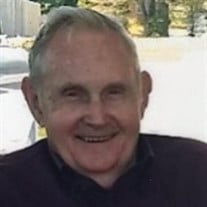 Robert G. Rainey of Tullahoma passed this life on Sunday, February 27, 2022 at the age of 92. Funeral Services are scheduled on Thursday, March 3, 2022 at 11 AM at Grace Baptist Church with burial to follow at Maplewood Cemetery. The family will receive friends on Wednesday, March 2, 2022 from 5-8 PM at Grace Baptist Church and on Thursday, March 3, 2022 from 10 AM until the service time. A native of Chapel Hill, TN, he was the son of the late Glenn and Alberta Waggoner Rainey. He was a very active member of Grace Baptist Church. Mr. Rainey was a handyman and could fix anything. He retired as a Machinist from AEDC after 38 years of service. He enjoyed gardening and was know for his tomatoes. He could grow anything. Mr. Rainey was also a storyteller and enjoyed entertaining his family with stories. In addition to his parents, he was preceded in death by his loving wife of 66 years, Peggy Rainey; son, Timothy Charles Rainey; brother, James Rainey and sister, Dorothy Dorsett. He is survived by sons, Donnie Rainey (Esther) of Estill Springs, Michael Rainey of Tullahoma and David Rainey of Tullahoma; daughter, Tammie Litchford (Michael) of Tullahoma; brother, Jerry Rainey (Patricia) of Lynchburg; grandchildren, Stephanie Parris (Trey) of Tullahoma, Eddie Rainey (Emily) of Tullahoma and Natasha Rainey (Fiancé, Rick Schroeder) of LaVergne and five great grandchildren. In lieu of flowers, the family has requested memorial donations be made in his honor to the Grace Baptist Church Building Fund or Gideon’s International. Online condolences may be made at www.davesculbertsonfuneralhome.com. Daves-Culbertson Funeral Home is in charge of arrangements.

Robert G. Rainey of Tullahoma passed this life on Sunday, February 27, 2022 at the age of 92. Funeral Services are scheduled on Thursday, March 3, 2022 at 11 AM at Grace Baptist Church with burial to follow at Maplewood Cemetery. The family... View Obituary & Service Information

The family of Robert G Rainey created this Life Tributes page to make it easy to share your memories.

Send flowers to the Rainey family.