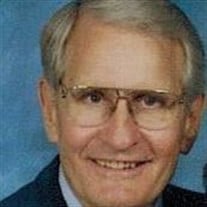 On Friday, September 11, 2020, Richard “Dick” Roberds, Loving husband and father of three children passed away at age 86. Dick was born in Lawrence Kansas to Wesley and Dorothy Roberds June 22, 1934. In 1956 he graduated from the University of Kansas with a Bachelors degree in Physics. On August 8, 1958 he married, the love of his life, Marian “Marcy” Lanyon. They raised a son, Michael and two daughters, Catherine and Wendy. In 1956, he was commissioned in the United States Air Force where he became a highly decorated combat pilot and academic scholar. In the Air Force, he flew the F-102, T-33, T-37, T-38, and O-2 aircraft. He served a flying tour in Vietnam from Nov ’70 - Sep ’71, as the commander of the O-2 Night “Rustic” squadron, and flew over 100 combat missions. While in the Air Force Dick earned a Masters Degree and PhD (Doctorate) in Nuclear Engineering. Following his tour in Vietnam, he worked in the AF weapons Lab, Kirtland AFB 1973-‘76, the applied Physics Branch, Kirtland AFB, 1976-‘77 and the Avionics Lab, Wright Patterson AFB 1977-’80. In 1980, Dick retired as Colonel, after 24 years of distinguished service. During his time in the Air Force, he was highly decorated; awarded the Silver Star, Legion of Merit, Distinguished Flying Cross (2), Air Medal (8), Meritorious Service Medal and Air Force Commendation Medal. He was very proud of his accomplishments in the Air Force and would jokingly request to be addressed as “Colonel/Doctor”. After his retirement from the Air Force, Dick decided to go into academia, fueled by his love of teaching and working with students. This included stints as the Head of the Engineering Technology Department, Clemson University, 1980-’84, Clemson S.C. Dean of the School of Engineering, Univ Tenn Martin 1984-’86, Martin Tenn. Associate Dean Academic affairs, Acting Dean and Professor of Engineering Science, Univ Tenn Space Institute, 1986-’93, Tullahoma Tenn, and lastly, Head Integrated Science and Technology, James Madison Univ, 1993-2004, Harrisonburg VA. Dick retired in 2004 and moved back to Tullahoma Tennessee to be close to his brother, Donald Roberds, sister, Sharon Baxter, and friends. He was very active in the church and loved spending time with family and friends. He had a big heart, loved to laugh, meet new people and socialize. One of his favorite pastimes was to play and sing church hymns on his piano. Always making the list was “How Great though Art” and it’s befitting last verse; When Christ shall come With shouts of adulation And take me home What joy shall fill my heart Then I shall bow In humble adoration And then proclaim, my God, how great Thou art. Dick is survived by his wife Marcy, his three children, Michael, Catherine and Wendy, five grandchildren, his brother Don and his sister Sharon and several nieces and nephews. A funeral service will be held for immediate family, due to Covid restrictions, Saturday 19 Sept 2020 at 11:30am at Rose Hill Cemetery in Tullahoma Tennessee. In lieu of flowers please send donations to Tullahoma First Christian Church, 120 W Grundy St, Tullahoma, TN 37388 or The Alzheimer's Tennessee Association, South Central Tennessee Office, 309 N. Jackson St, Tullahoma, TN 37388. Please visit our website at www.davesculbertsonfuneralhome.com to leave online condolences. Daves-Culbertson Funeral Home is in charge of arrangements.

The family of Richard M Roberds created this Life Tributes page to make it easy to share your memories.

Send flowers to the Roberds family.