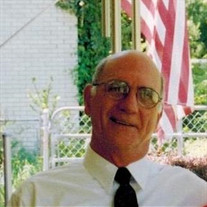 Paul Alan Fuller of Tullahoma passed this life on Friday, July 19, 2019 at his residence at the age of 75. Funeral Services are scheduled for Wednesday, July 24, 2019 at 11 AM at Daves-Culbertson Funeral Home with burial to follow at Oakwood Cemetery. The family will receive friends from 5 -8 PM on Tuesday, July 23 at the funeral home. A native of Bedford County, he was the son of the late Alvin and Pauline Jones Fuller. He was a U S Army veteran and also served in the National Guard serving approximately 17 ½ years totally. He was a supervisor at Wisco Envelope and after retirement was very active with the Tullahoma and Manchester Senior Citizens, serving as President of the Coffee County Senior Citizens Center. He also worked for the Tullahoma News and Lowes. Mr. Fuller was a member of the Thompson Creek Baptist Church and enjoyed dancing, collecting guns, playing golf, gardening, reading and photography. He was a very active member of the Boy Scouts for 26 years. In addition to his parents, he was preceded in death by son, Franklin Delanoe Roosevelt Prater Jr. and brother, Verlon Fuller. He is survived by his loving wife, Gracie Ann Culver Fuller of Tullahoma; sons, James Wesley Prater and his wife, Stacey of Normandy and Jon Joseph Fuller and his wife, Deborah of Summrall, MS; daughters, Brenda Louise Bivins and her husband, Danny of Manchester and Deborah Kaye Fuller of Murfreesboro; sister, Sandra Cossey of Fayetteville; grandchildren, Jeremy Bivins and his wife, Aurora of Knoxville; Brittany Bivins of Kauai, HI, Bryant Prater and his wife, Katie of Normandy, James Fuller and his wife, Amanda of Winchester, Tiffany Scalf of Manchester and Natasha Garbe and her husband, Mike of Marshfield, WI and great grandchildren, Jack Fuller, Everly Rose Garbe and Adalynn Scalf. Online condolences may be made at www.davesculbertsonfuneralhome.com DAVES-CULBERSTON FUNERAL HOME IS IN CHARGE OF ARRANGEMENTS

Paul Alan Fuller of Tullahoma passed this life on Friday, July 19, 2019 at his residence at the age of 75. Funeral Services are scheduled for Wednesday, July 24, 2019 at 11 AM at Daves-Culbertson Funeral Home with burial to follow at Oakwood... View Obituary & Service Information

The family of Paul Alan Fuller created this Life Tributes page to make it easy to share your memories.

Send flowers to the Fuller family.