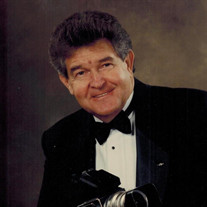 Leroy Munsey was born May 31, 1933 to the late Willie Mildred Arnold Munsey and Roy Munsey. He passed his life on October 8, 2021 at his home surrounded by his loving family. Leroy served his great country for 5 years in the United State Airforce. Upon leaving the military, he began working at Arnold Airforce Base as a photographer. During this time, he received the Professional Photographers of America, the “Dick” Dickerson Award, the Southeastern Award, and multiple Court of Honors. He went on to obtain a photographic craftsman certification, as well as, becoming a certified Tennessee photographer. He served on the council of the National Photography Association for 13 years and was a member of the Tennessee Professional Photographers’ Association for 69 years where he was named president in 1976. Leroy was very active in the community during his lifetime. He later opened two successful photography studios where he served many families and students over the years. He was a member of Highland Lodge 214 for 62 years, as well as, Worshipful Master in 1969. He was also part of the Scottish Rite, where he obtained the 32nd degree, as well as, a lifetime member of the AL Menah Temple. In addition, to the above, he was a member of the Flying Fezz and the Motor Corps. After retirement from the base and photography, he became employed with the Coffee County Board of Education as a bus driver for 12 years. Leroy was a devout Christian and a member of the of East Main Church of Christ. He enjoyed riding motorcycles, flying his planes as an instrument rated-multi engine pilot, living life on the farm, spending as much time as possible with family and friends and watching the VOLS play football. In addition to his parents, he is preceded in death by his sister, Zada Ruth Munsey Sellers. He is survived by his loving wife, Shelia; three daughters, Vickie Munsey (Joe), Leanne Munsey Clayton, Tracy Munsey McDonald; grandchildren, Amanda Scattergood, Kyle Clayton, Sean Mason (Ashley), Sawyer Mason, Briana McDonald, Ashlyn McDonald; great-grandchildren, Kaleb, Amelia, Alyssa and Korbin Scattergood, Kaylee Mason, Kelby Barnes, Oliver Barnes; special family, Steven, Penny, Adam (Kayla), Heidi (Joseph) Barnes. Many sisters and brother-in-law and an abundance of nieces and nephews. Online condolences may be made at www.davesculbertsonfuneralhome.com. Daves-Culbertson Funeral Home is in charge of arrangements.

Leroy Munsey was born May 31, 1933 to the late Willie Mildred Arnold Munsey and Roy Munsey. He passed his life on October 8, 2021 at his home surrounded by his loving family. Leroy served his great country for 5 years in the United State Airforce.... View Obituary & Service Information

The family of Leroy Munsey created this Life Tributes page to make it easy to share your memories.

Send flowers to the Munsey family.