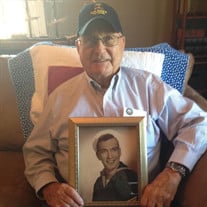 John David Warmbrod, age 87, of Belvidere, TN, was welcomed into Heaven on Wednesday, May 27, 2020, at his residence, spending his final days of this life surrounded by his treasured family. Mr. Warmbrod was born in Belvidere, Tennessee on June 26, 1932, to the late John Earl (Chick) and Mary Lou (Osborne) Warmbrod. He graduated from Franklin County High School in 1950 where he played football. He joined the Navy on December 27, 1950. He served aboard the Ship USS Bexar-APA 237 which was stationed in San Diego with deployments to Hawaii, Hong Kong, and Manila during the Korean War. He served until October 1954 when he returned to Franklin County. He married Miss Bettye Joyce Swann on June 11, 1955. He graduated from MTSU with a Bachelor of Science degree in 1958 and a Master of Arts degree in mathematics from the University of Alabama in 1962, with his thesis being, “An Analysis of a System of Differential Equations.” Mr. Warmbrod began his professional career at Brown Engineering and during his career was a consultant for Remtech. The majority of his professional life was spent with NASA where he was one of the charter members of the Marshall Space Flight Center. He retired from NASA in 1997 after over 30 years there as an aerospace engineer, during the Apollo and Space Shuttle Programs. His work involved determining and analyzing the pressures and temperatures of the heat shields of the orbiter sections and reusable boosters during separation and re-entry into the earth’s atmosphere, the possible effects of the interaction of the exhaust gases, and the shock wave interactions from the rocket motors of the shuttle. Mr. Warmbrod received many awards during his NASA career including the Exceptional Service Medal and First Shuttle Flight Achievement Award. He was also selected as a Space Flight Honoree where John and Bettye were invited to view a shuttle launch from Kennedy Space Flight Center. Known by many friends as Johnny, he was extremely outgoing and made friends everywhere he went, with his larger than life personality. He was an animal lover and truly a modern-day cowboy. He grew up loving and riding Tennessee Walking Horses. Johnny attended every Tennessee Walking Horse Celebration in Shelbyville from its beginning in 1939 when his Dad showed in the very first Celebration, missing only during his years spent serving in the Navy. As dearly as he enjoyed the horse shows, Johnny also thoroughly enjoyed his retirement years on many trail rides. He also loved his bird dogs and quail hunting. He trained, trialed, and judged bird dogs for American Field horseback trials across Tennessee and Alabama. He was an avid fisherman as well with many of his trophies mounted on the walls of his cabin, Johnny’s Place. He was a dedicated lifelong member of the First United Methodist Church (FUMC) of Winchester. He was a member, a former teacher, and a former president of the Friendship Sunday School Class. He served on numerous committees in varying capacities at FUMC, including serving as treasurer on the finance committee and chairing the Staff Parish Relations Committee. He was preceded in death by his parents, John Earl and Mary Lou Warmbrod and nephew, Troy Warmbrod. He is survived by his wife of 64 years, Bettye Swann Warmbrod; daughters, Barbara “Babs” Feaster and her husband Joe and Sharon “Sheri” Gamble and her husband Jeff; granddaughters, Rachel Crossland and her husband Travis and Amber Heath and her husband Max; great-grandchildren, Chloe Crossland, Maxwell Heath, and Elizabeth “Libby” Heath; sister, Julia Warmbrod (all of the above of Belvidere); brother, Joe Warmbrod and his wife Anita (of Greeley, CO); brothers-in-law and sisters-in-law, the late Billy Joe Swann and his wife Joan (of Winchester), Barbara Weaver (of Decherd), and the late Jimmy D. Swann and his wife Stephanie (of Decherd); nephews, Eric Warmbrod (of Windsor, CO) and his wife Lori, Terry Weaver and his wife Leslie (of Gunter, TX), Stephen Swann and his wife Mary (of Decherd), and Jedd Swann and his wife Meredith (of Decherd); nieces, Cindy Chambless and her husband Don (of Jacksonville, FL), Wendi Weaver (of Decherd), and Joanna Miller and her husband Clifton (of Belvidere); 7 great nephews; 4 great nieces; 4 great-great nephews; and so many very special friends. Graveside services will be held at 11:00 a.m. on Monday, June 1, at the family cemetery. He will be laid to rest at his beloved farm in Belvidere. Everyone is welcome; however, due to Covid-19 and CDC guidelines, the family asks that you please try your best to remember to maintain the recommended social distance and refrain from any hugs or other close physical contact at this time. Donations may be made in his memory to the building fund at First United Methodist Church of Winchester.

John David Warmbrod, age 87, of Belvidere, TN, was welcomed into Heaven on Wednesday, May 27, 2020, at his residence, spending his final days of this life surrounded by his treasured family. Mr. Warmbrod was born in Belvidere, Tennessee on June... View Obituary & Service Information

The family of John D Warmbrod created this Life Tributes page to make it easy to share your memories.

John David Warmbrod, age 87, of Belvidere, TN, was welcomed into...