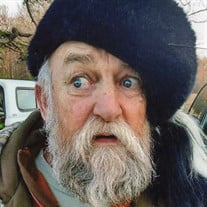 Jerry “Coyote” or “Frog” Dale Jones of Normandy, passed this life on Sunday, September 15, 2019 at his residence at the age of 75. Funeral Services are scheduled for Wednesday, September 18, 2019 at 2 PM at Daves-Culbertson Funeral Home with burial to follow at Hurricane Cemetery in Moore County. Visitation with the family will be Tuesday, September 17 from 5 – 8 PM at Daves-Culbertson Funeral Home. Jerry, a native of Bedford County, was the son of the late Floyd and Annie Rowlette Jones. He was a carpenter by trade but also enjoyed building projects at home. He was an avid outdoorsman and enjoyed hunting, fishing, riding four wheelers and hunting for ginseng. Jerry had booths at the Johnson’s Flea Market and enjoyed meeting people and wheeling and dealing. He was outgoing and a jokester. He also enjoyed collecting old trucks and raising chickens and goats. He loved his family and his animals. In addition to his parents, Jerry was preceded in death by his wife, Madie Louise McBride Jones; son, Ronald Jones and brothers, Billy Joe and Lannie Jones. Jerry is survived by daughter, Rhonda Comstock and her husband, Taylor of Normandy; brother, Ronnie Jones and his wife, Brenda of Tullahoma; sisters, Floy Jean Brown and her husband, Lawrence of Shelbyville and Elizabeth Brewer of Normandy; granddaughter, Leann Dunnavant and her husband, Eric of Tullahoma; great grandson, Austin and many nieces, nephews and good friends. Online condolences may be made at www.davesculbertsonfuneralhome.com DAVES-CULBERSTON FUNERAL HOME IS IN CHARGE OF ARRANGEMENTS

The family of Jerry "Coyote" or "Frog" Dale Jones created this Life Tributes page to make it easy to share your memories.

Jerry “Coyote” or “Frog” Dale Jones of Normandy, passed this...

Send flowers to the Jones family.