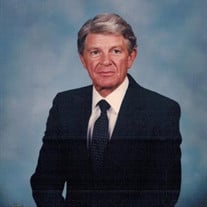 Harold Headley Offutt, Jr. passed away on May 27, 2022 at his home in Tullahoma, following a short illness. He was 92. He was born in Earlington, KY on March 22, 1930 to the late Harold Headley Offutt, Sr. and the late Ruby Lee Beard Offutt. Raised in Earlington until he was 14, Harold spent many days with his grandfather, Sam Offutt in his drugstore. He moved to Mt. Pleasant, TN in 1944, with his family when his father got a job as a train engineer with the L&N Railroad. Harold would become the QB of the Hay Long High School football team in Mt. Pleasant where he would begin dating his future wife after asking her to ride home with him on the pep bus after an away game. Harold and Mary Bond Burnett married on March 15, 1952 while he was home on leave from the Army. Following their marriage, Harold was stationed at Tripler Hospital in Honolulu, HI where he served as a medic during the Korean War. Mary Bond would join him in Hawaii and they spent their first year of marriage there. After his time in the Army, Harold attended pharmacy school, following in his grandfather’s footsteps. He graduated from The University of Tennessee School of Pharmacy in 1955, where he was a member of the Phi Delta Chi fraternity. Harold and Mary Bond moved to Tullahoma in 1959 where they planted roots and began their family. He and his wife were members of the Bel-Aire Church of Christ, which would later relocate and become the Cedar Lane Church of Christ. Harold joined Medical Building and Taylor’s Pharmacies, becoming a partial owner. Harold served the Tullahoma community for over 30 years before retiring to play golf full time. An avid golfer, he won the Senior Championship tournament at Lakewood Golf and Country Club on two occasions and made a hole in one on their course once. In addition to golf, he ran two or three miles several times a week, he could be seen running on the THS track many years before it became a popular pastime. A strong supporter of The University of Tennessee sports, he and his wife spent many Fall Saturdays in Neyland Stadium with their children. Watching Tennessee football and basketball games became a family tradition. Mr. Offutt had a joy for life and loved to play pranks on his family and friends. In addition to his parents, he was preceded in death by his beloved wife of 62 years, Mary Bond Burnett Offutt and his sister, Martha Jean “Dollye” Offutt Haskew. Mr. Offutt is survived by his four children, Daryl Offutt of Fayetteville, Mary Lee Stewart of Estill Springs, Kevin (Denise) Offutt of Franklin and Lynda (Sean) Sanders of Murfreesboro; three grandchildren, Alex Adams, Holly Stewart (Thomas Clark) and Connor Offutt; one great-grandchild, Adaleyah Adams and a great-grandchild on the way, Riley Clark; and many beloved nieces and nephews. The family would like to extend their gratitude to the staff of Brookdale Assisted Living and Compassus Hospice of Tullahoma for their care of Harold over the last several weeks. Services will be held Tuesday, May 31 with visitation from 12:00 PM to 2:00 PM and the services to begin at 2:00 PM, with interment to follow at Rose Hill Memorial Gardens. Memorials can be made to the Cedar Lane Church of Christ (1200 Cedar Lane Tullahoma, TN 37388) or Special Olympics.

The family of Harold Headley Offutt Jr. created this Life Tributes page to make it easy to share your memories.

Send flowers to the Offutt family.