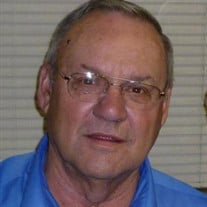 Donald Jay Hendrixson, Sr., age 81, passed away on April 18 at Vanderbilt Tullahoma-Harton Hospital. Funeral services are scheduled for Monday, April 25, 2022 at the Daves-Culbertson Funeral Home with visitation beginning at 10 AM and a service following at 11 AM. A native of Miami County, Don was born at home on July 19, 1940 in Peru, Indiana. He was the son of the late Ova Jay Hendrixson and Betty Bee Garner. On November 12, 1971, he married Donna Miller Weaver. In 1958, Don graduated from Tipton Township High School in Onward, Indiana. Throughout his life, Don enjoyed various occupations. He was a foreman for many factories through the years, worked on the railroad, enjoyed farming and carpentry projects, and especially enjoyed working with his hands. He retired in 2002 from Power Tool Manufacturing. Don was an avid fisherman and caught enough crappie and bluegill to fill his freezer and often enjoyed sharing with family and friends. He loved to talk about fishing to anyone he could, discussing water temperature, spawning seasons, and the depth of nearby lakes. He owned maps of local lakes and kept detailed records of his fishing routes. He had fished in every state in the U.S. except Georgia. He and Donna loved spending time together taking road trips and shopping at second hand stores. He enjoyed raising beef cattle and even owned and showed a Grand Champion Polled Hereford one year. He was an experienced farmer, planting row crops and raising animals. Surviving are his wife, Donna Hendrixson of Tullahoma, TN, her children, Craig (Dana) Weaver of Angola, IN, Kevin (Karen) Weaver of Auburn, IN, Todd (Jennifer) Weaver of Angola, IN, Shane Weaver of Fayetteville, TN; his children, Don (Dede) Hendrixson of Logansport, IN, and Robyn (Loren) Regier of Hampton, GA, a brother, Sam Hendrixson of Morrison, TN, and a sister Peggy (Dan) Jones from Peru, IN. He has 17 surviving grandchildren; Adam Weaver, Brianna (Derek) Jaeger, Jennifer Weaver, Matt Weaver, Emma Huschka, Brennan Weaver, Maggie Weaver, Chris Weaver, Kayla (Jonathon) Racine, Kelsey (Harley) Asher, Whitney (Garrett) Rushing, Ethan Regier, Nate Regier, Katie (Mario) Arenas, Christy Hendrixson, J.P. (Maddie) Hendrixson, Kerri Hendrixson, and 17 great-grandchildren. He is preceded in death by his parents, Jay and Betty Hendrixson, and his grandson, Evan Weaver. Online condolences may be made at www.davesculbertsonfuneralhome.com. Daves-Culbertson Funeral Home is in charge of arrangements.

Donald Jay Hendrixson, Sr., age 81, passed away on April 18 at Vanderbilt Tullahoma-Harton Hospital. Funeral services are scheduled for Monday, April 25, 2022 at the Daves-Culbertson Funeral Home with visitation beginning at 10 AM and a service... View Obituary & Service Information

The family of Donald "Don" Jay Hendrixson Sr. created this Life Tributes page to make it easy to share your memories.

Send flowers to the Hendrixson family.