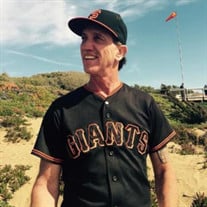 Chilcote, David Allen, “Chilly”, age 60, formerly of Tullahoma passed away Wednesday, May 18, 2022. David was a United States Coast Guard veteran, a former employee of NASA, and in 1989 started his own business (Maverick Communications) in fiberoptic telecommunications. David was born January 31st 1962 in Altoona, Pennsylvania. He moved at the age of 12 to Daly City, California where he would marry and have one son. David will be remembered most for his love of making people laugh, playing baseball, and his family. David spent the past 24 years playing baseball in various leagues in the Bay Area of California before moving to Tullahoma Tennessee to be closer to his son and grandson. He made many friends along the way and was known for “always being the life of a party”, and “a guy who is always having too much fun!” David lived life to the fullest, he loved fast cars, motorcycles, playing sports, dancing, and karaoke. David was an incredible father. He loved being a dad, he loved teaching his son how to be a dad, and he was a father figure to more than just his son. He is survived by his son Matthew, grandson Rowan, brother Mike, sister Rose, fiancée Julie and her children, and many nieces and nephews. He will be deeply missed by his friends, family, and all who knew him. Online condolences may be made at www.davesculbertsonfuneralhome.com. Daves-Culbertson Funeral Home is in charge of arrangements.

The family of David Chilcote created this Life Tributes page to make it easy to share your memories.

Send flowers to the Chilcote family.