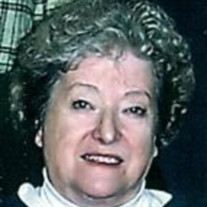 Carol F. Clay, formerly of Tullahoma, passed this life on Tuesday, December 1, 2020 at Alive Hospice in Nashville, TN. Memorial Services will be scheduled at a later time due to the current COVID situation. Mrs. Clay, a native of Ironton, OH, was the daughter of the late William and Alma Markins. She and her husband, Thomas (Tom) lived in Tullahoma for 56 years before relocating to College Grove, TN. They would have been married 62 years in January, 2021. Mrs. Clay was known as “Mama C” to all her daughter, Joy’s friends while they were growing up. She was a teacher’s aid at St. Paul’s school while Joy was a student and always enjoyed being with the children. She picked up all of Joy’s friends on the weekends when Joy was at West Middle School and her first few years of high school to insure they had a safe ride to cruise, go to the movies, etc. When Joy was a student at Tullahoma High School, Mrs. Clay and her husband always helped chaperone trips and held celebration parties at their home for the students in THS singers as well as for the cast of numerous plays in which her daughter Joy had a role. Mrs. Clay was a financial aid student advisor for Motlow State Community College for over twenty years. She always took care of her Motlow students, making sure they received any possible financial aid. While there, she became an avid Baseball and Boys Basketball fan and attended all the games until she fell ill. She was a second mom to these boys and bought essentials including furniture, toiletries, and food for those boys who could not afford these items. She was also an animal lover who brought home any stray animal she could catch, including several cats, dogs, and horses over the years. She trapped and neutered and/or spayed the feral cats that lived at Motlow and then fed and watered them as well as the stray dogs that lived at Motlow for 20+ years. She found homes to relocate all of them when she retired. She continued to help her husband care for a rescued horse and help her daughter Joy rescue abandoned and abused guinea pigs until her passing. In addition to her parents, she was preceded in death by sister, Joyce Markins Bocook. Mrs. Clay is survived by husband, Thomas (Tom) Clay of College Grove, TN and daughter, Joy Clay Chrisman and her husband, Ben Chrisman of Franklin, TN. In lieu of flowers, the family has requested memorial donations be made in her name to Alive Hospice, 1718 Patterson St, Nashville, TN 37203, 615-327-1085 or https://www.alivehospice.org/donatenow. Online condolences may be made at www.davesculbertsonfuneralhome.com. Daves-Culbertson Funeral Home is in charge of arrangements.

Carol F. Clay, formerly of Tullahoma, passed this life on Tuesday, December 1, 2020 at Alive Hospice in Nashville, TN. Memorial Services will be scheduled at a later time due to the current COVID situation. Mrs. Clay, a native of Ironton, OH,... View Obituary & Service Information

The family of Carolyn "Carol" Faye Clay created this Life Tributes page to make it easy to share your memories.

Send flowers to the Clay family.