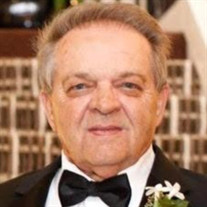 Alva Jenkins Marshall, age 77, of Manchester, TN passed away peacefully on February 17, 2021. Born on December 9, 1943, he was the third child of James Harry Marshall and Leah Beryl Jenkins Marshall of Vonore, TN. Al was a graduate of Vonore High School in 1961, and he was a 1966 graduate of the University of Tennessee with a Bachelor of Science in Physics degree. In 1979, he married Mary Jane Bloom Marshall of Huntsville, AL, with whom he had one son. Al spent the bulk of his career as a computer systems engineer, living and working in Huntsville for several years upon his graduation from college. He returned home to East Tennessee with his wife, Janie, in 1979 and worked for Alcoa Corporation for a number of years. In 1986, Al moved to Manchester and eventually settled in Tullahoma, TN, where he lived for nearly 30 years, many of which he spent commuting to Huntsville for work. He retired in 2007, and a few years ago he moved back to Manchester where he was a resident at Extended Family Care. Al enjoyed fishing and being outdoors. He loved Jeeps, having owned one most of his life. He also enjoyed sports, primarily college football, and spent many a Saturday grilling steaks and watching the Vols. The true love of his life was his wife, Janie, and although their time together on Earth was short, he carried her memory with him vibrantly. Al is preceded in death by his parents, James Harry Marshall and Leah Beryl Jenkins Marshall; his brothers, MAJ (Ret.) Dennis Sanford Marshall and Frederick Ray Marshall; his sister, Judith Faye Marshall Bonafield; and his wife, Mary Jane Bloom Marshall. Al is survived by his son, Jordan Ray (Julie) Marshall of Nashville, TN; his grandson, Miles Thomas Marshall; and his granddaughter, Molly Jane Marshall. Interment of ashes will occur at a later date in a columbarium in the chapel of Sherwood Chapel and Memorial Gardens in Alcoa, TN. The family may also hold a private memorial service at a later date. In lieu of flowers, trace a trotline, go for a Jeep ride or fire up the grill and think of Al. Memorial contributions may also be made to Avalon Hospice – Tullahoma. Please visit our website at www.davesculbertsonfuneralhome.com to leave online condolences.

Alva Jenkins Marshall, age 77, of Manchester, TN passed away peacefully on February 17, 2021. Born on December 9, 1943, he was the third child of James Harry Marshall and Leah Beryl Jenkins Marshall of Vonore, TN. Al was a graduate of Vonore... View Obituary & Service Information

The family of Alva Jenkins Marshall created this Life Tributes page to make it easy to share your memories.

Send flowers to the Marshall family.