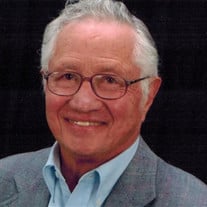 Albert “Al” Bart of Tullahoma, Tennessee passed away on December 5, 2021, at the age of 92 from complications due to Parkinson’s disease. The son of Italian immigrants, Al was born in Brooklyn, New York to Joseph and Stella (Ebetino) DeBartolo. Raised in Rye, New York, he went on to graduate from Columbia and Boston Universities and serve as a Navy officer during the Korean war. He spent the last five decades of his life in Tullahoma, retiring more than 25 years ago from the University of Tennessee Space Institute and spending nearly 15 years in post-retirement with H&R Block. An avid reader and dedicated golfer until late in life, Al spent his final years as a resident of Brookdale Assisted Living in Tullahoma where he endeared himself to all those around him. He is survived by his five children, Alison Sheehan (Frank) (Laurel, Maryland), Susan DeBartolo (Jim Dittman) (Tulsa, Oklahoma), Lauren Shields (Bob Smorodin) (University City, Missouri), Stephen Bart (Trisha Gura) (West Newton, Massachusetts), and Albert Bart, Jr. (Dawn) (Brentwood, Tennessee), eight grandchildren, and two great-grandchildren. He is also survived by his dear friend and companion, Bertie Davis (Tullahoma, Tennessee). Preceding him in death was his sister Lucy Sabatine Hutcherson, brother Salvatore “Sal” Bart, first wife Sue Rowley Bart, second wife Joan Peterson Bart, and grandchild Alexander Shields. Arrangements for a memorial service will be determined at a later date, and the family asks that those who wish to do so remember Al by making a contribution in his name to the Parkinson’s Foundation (www.parkinson.org), Michael J. Fox Foundation (www.michaeljfox.org) or Tennessee Golf Foundation (www.tngolf.org). He will be greatly missed.

Albert &#8220;Al&#8221; Bart of Tullahoma, Tennessee passed away on December 5, 2021, at the age of 92 from complications due to Parkinson&#8217;s disease. The son of Italian immigrants, Al was born in Brooklyn, New York to Joseph and Stella... View Obituary & Service Information

The family of Albert "AL" J. Bart Sr. created this Life Tributes page to make it easy to share your memories.

Albert “Al” Bart of Tullahoma, Tennessee passed away on December...

Send flowers to the Bart family.